Often when servicing an HVACR system the technician finds a situation where the compressor’s apparent performance is questionable. Any number of possible scenarios and causes may lead to this such as a higher than expected suction pressure or possibly an excessive amp draw. In any case, after performing all the standard system checks and tests the question often becomes “Is the compressor doing what it’s designed to do?

To get to this point the tech may believe he has exhaust all of his resources and feels stumped as to why this pump isn’t operating as he feels it should. There’s one additional tool he is overlooking. The Compressor Performance Curve.

Compressor manufacturers publish standardized performance information in several forms. The most basic of these are those for performance at standard ARI rating conditions. These typically only state a single capacity rating for a standard condition. Heat pump compressors are usually rated and two standard conditions. Neither is of much real use to the field service technician.

Manufacturers also publish expanded ratings which may be in the form of catalog capacity ratings charts where the compressor performance data includes capacity(Btu/hr) and power input (KW) but still this doesn’t offer much for the service tech.

This brings us to yet another form of published compressor ratings offered by manufacturers. It’s the performance curve.

The term “performance curve” comes from the method which has been used for generations by plotting compressor performance in a graphical format and relating it to saturated suction temperature vs. saturated discharge temperature. Typically the plots include curves for capacity, power input and amperage at a given voltage.

The amperage rating is precisely what the field service technician need to answer his question.

Take a look at a classic performance curve from 1966 in Fig.1. This is for a 3-phase medium temp Copelametic running on R22 refrigerant. 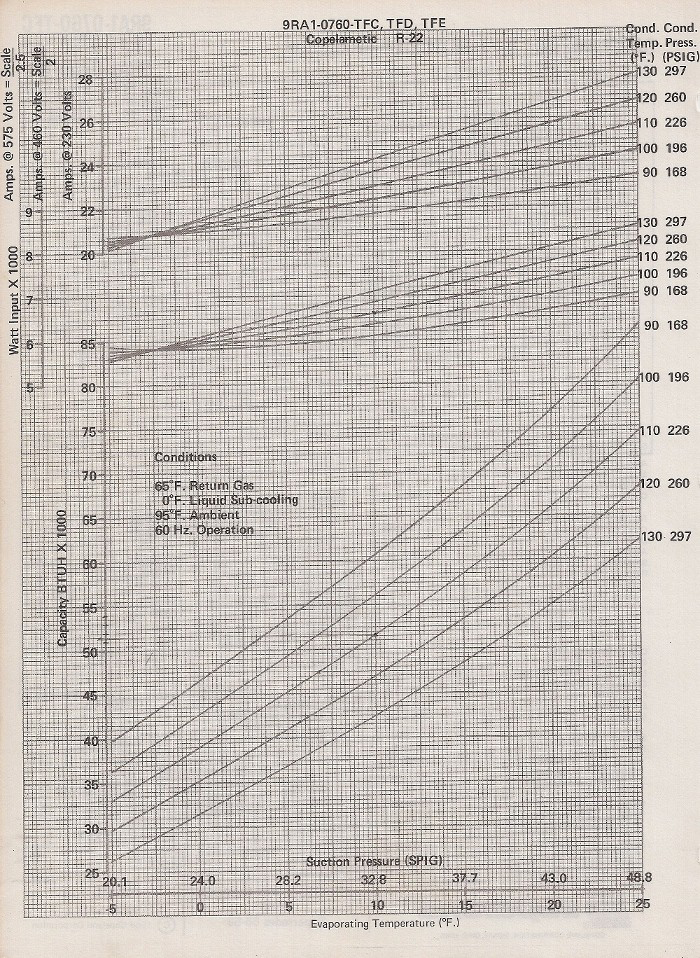 Note how the performance curve can be used to determine what the compressor should be doing at any given condition. You can see that if the suction and discharge temperature (or pressures) are known, it’s a simple task to read off what the expected amperage is at those conditions.

One point to consider when using the curve for checking amp draw is the curves show amperage at a specific voltage. Notice that the Amps curve as shown is for a 230V supply voltage. In the upper left corner, there are correction factors for 460V and 575V. If the actual or measured supply voltage is different the expected amp draw will change in direct proportion to the voltage.

If for example the measured supply is 210V. What would be the expected amperage be? To determine this simply multiply the amperage indicated on the curve by the ratio of the rated voltage / measured voltage:

Also you will see that the performance curve lists some fixed parameters like Return Gas Temperature, Liquid Subcooling, Ambient and Hz Operation (Frequency).

Return gas temps will have a minimal effect on amp draw. Ambient, as used in the curves is not to be confused with the ambient temperature entering a condenser. It’s basically only is referring to the air temperature the compressor sees and also has little effect on performance. The frequency of course is what determines compressor speed or RPM and would have a significant effect on performance but for the most part we really don’t have to be concerned as our power supplies are fairly fixed at 60 Hz. The one to be most concerned with is the liquid subcooling rating as many technician may be confused with how subcooling affects amp draw in a system.

An increase in liquid subcooling will increase the refrigerating effect dramatically. It doesn’t affect the amperage however. If you’re looking for expected capacity of a compressor, the liquid subcooling factor is necessary. For determining expected amp draw, subcooling really doesn’t matter.

A typical Copeland performance curve from 1982 is shown in Fig.2 and Fig.3. Note that the plotted curve in Fig.2 now only includes capacity and power input. Again, this may be fine for a system designer but next to useless for a service tech. The expected amps are now indicated on chart in Fig. 3. 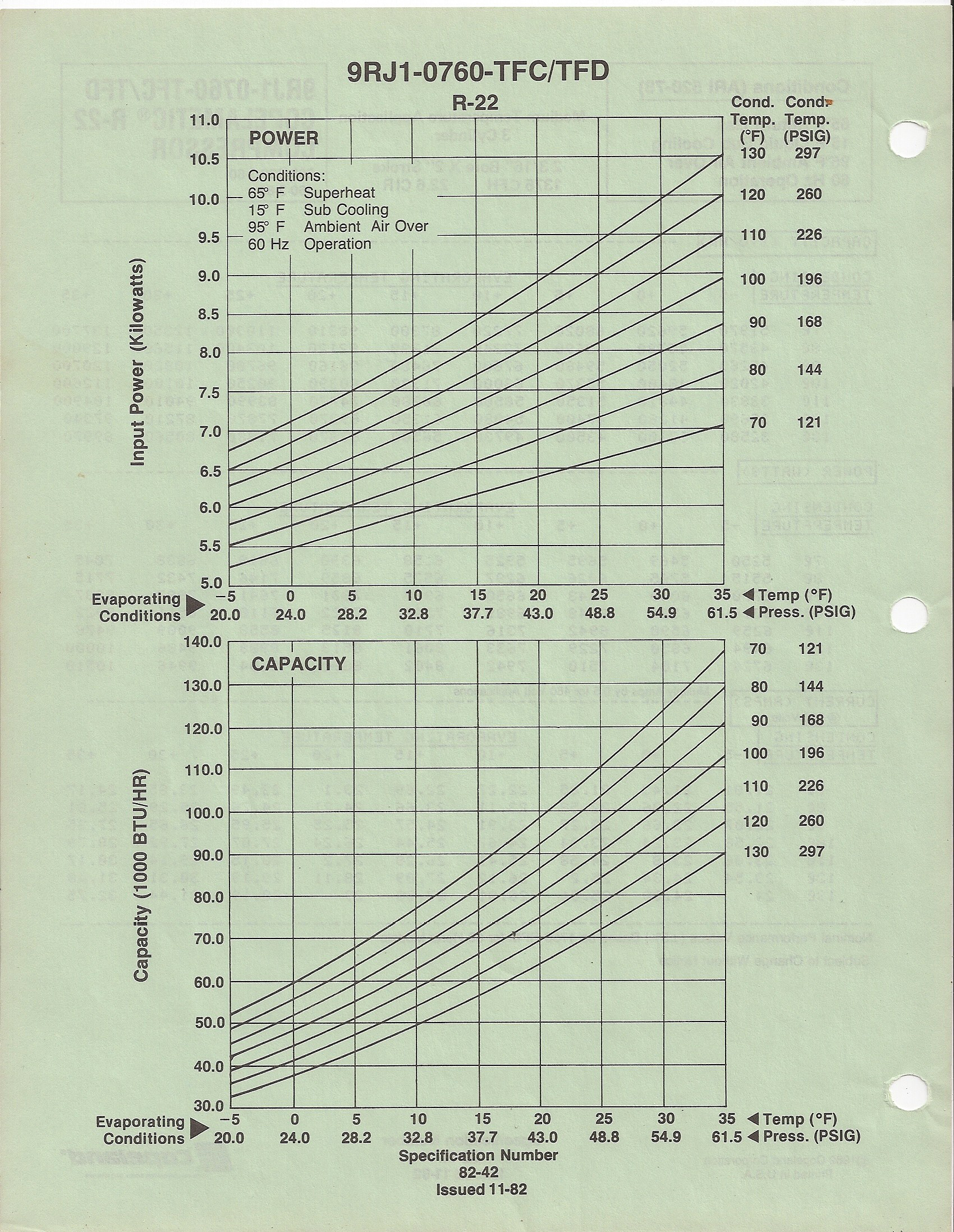 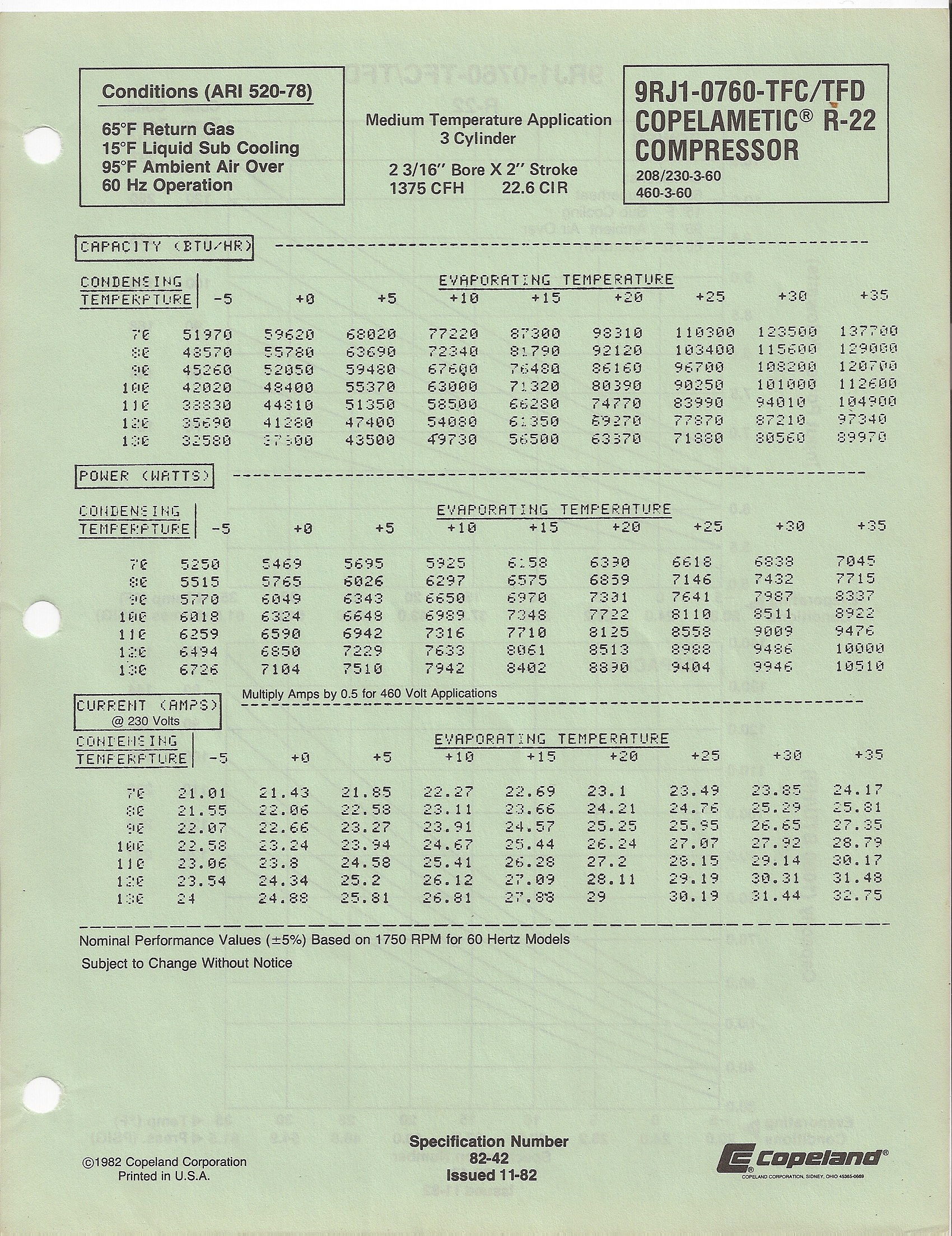 the chart in Fig.3 to determine expected amperage at a give set of conditions usually requires interpolating between the listed ratings points. You can plot this on some graph paper or even with a computer program for plotting points, but a simple math calculation or straight line interpolation isn’t all that difficult…although in this case you have to interpolate three times.

The first step is to interpolate for the evap temperatures. 15°F and 20°F are listing amps of and we want to know what the amps would be at the condensing temperature of both 110°F and 120°F, so we have to calculate the amps at those two conditions.

The difference is only .05 amps so we don’t have to go further…just call it 27.7 amps. But in some case it may be significant, so here’s how to do it:

But wait…we’re not quite done yet. Don’t forget to factor in the actual supply voltage. For this example, let’s say the measured voltage at the compressor terminals is 242 volts (averaged). Going back to the amperage correction equation:

So for 242 volt and inserting our interpolation results:

Now you have a reliable prediction of what this compressor should be doing at these conditions. Your measured amperage should be within 10% +/- of this value. If all external factors have been checked and eliminated and the measure amperage is outside of this range, the performance curve is telling you to look to internal mechanical or electrical problems.

So far a bit of the past and a lesson of how to use performance curves to your advantage in the field have been presented. Hopefully this has added a new diagnostic tool for those tech who haven’t used one before and perhaps a refresher for those who do.

I would be remiss not to mention The Copeland Compressor Performance Calculator *. This is a wonderful tool to add to your arsenal. It is available for free download at Copeland’s Product Selection Software in their Online Product Information page. You must register and log on (which is fast and easy), download it to you PC or Laptop and you’ll be able to generate performance data for all compressor made by Copeland.

See a screenshot of Copeland’s Compressor Performance Calculator with the results for the example we just did in Fig 4.

Some compressor models allow for a little extra tool within the Calculator. Its a Check Amps feature where all you need to is enter the compressor model, measured voltage, suction press, discharge pressure and it gives you the expected amperage directly. (For whatever reason this is available for Copelawelds and Scrolls but not for Copelametic and Discus compressor.) 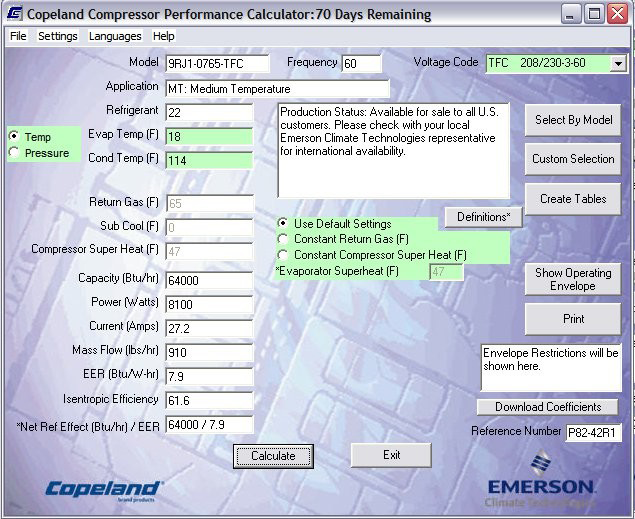 You’ll note that the compressor model is updated, but it’s the same compressor as the one in the earlier example. The expected amp draw at 230V shows 27.2 amps. Pretty cool, eh?

* Copeland has since replaced the Compressor Performance Calculator with the Product Selection Software program. The link above has been updated to reflect that.